About a week ago I got it in my head that I wanted to make my own sausage. Not just make the filling and use loose as I already do with stuff like chorizo, but take that filling and stuff it into a casing and hang it in a curing cabinet or toss it on the smoker or or or...

I had big ideas. Visions of grandeur if you will. Jeff quickly talked me down from that meat-laden cliff and said let's start small. Hold off on the salumi for a bit and lets try stuffing brats. I will admit I was disappointed but when we started doing the aforementioned stuffing I realized why 20 pounds of mortadella might have been a big bite to chew.

I won't t lie. Stuffing is not easy. I killed a lot of the casing just twisting the sausages too hard or squeezing the filling too much. And I will admit I turned the last pound in a half into brat burgers (which are also AMAZING and less work). However I was really proud of the brats we did stuff. And it was worth it. WELL worth it. Because a brat in a casing really is a hell of a ton better than the burger. It is sooooo juicy and that first pop of the skin when you bite into it is pure brat bliss.

( I had Jeff write up the actual steps for the making of the brats because I was too busy stuffing my face with them.)

The one thing that is key with brats is keeping everything cold.  This means a couple trips to the freezer and a good chance to enjoy a couple beers while you wait.  Okay that is a lie because even though the process is very simple it is definitely something that requires time because it is a slow moving process. But let's begin.

Dice up the pork butt into 1 inch cubes.  Shove in the freezer for 20 minutes.

Set up your meat grinder/kitchen aid with a medium die.  Run all the pork butt through the medium die.  Once all the meat has been ground shove it back in the freezer for another 20 minutes.

Pull the meat from the freezer and throw your spices and liquid into it. Add only enough liquid to help it come together. You don't want it dripping wet. We like to cheat and throw the mixture into the kitchen aid stand mixer and beat everything together until it is all incorporated (yes you will have to do this in multiple batches).  However, you can easily mix it by hand.

Now set up your kitchen aid or sausage stuffer, throw some casings on it, tie off the end, and start stuffing.  Basically you are going to fill the casing with 6 or so inches of the pork  mixture and then twist a couple of times.  Where most people get tangled up is with the twisting because you want to continue to twist in the opposite direction.  i.e. brat one will be twisted clockwise,  brat two will be twisted counter clockwise, brat 3 clockwise, etc.  The reason is because if you twist all the same way you will untwist the previous one. (note: And get reallllllllllly irritated like I did. -Heather)

If you are not going to eat them all at once, put on a single layer and throw in the freezer overnight.  The next day, cut them to separate them and put them in a freezer bag then back in the freezer so you can you easily grab however many you need when you get hungry. 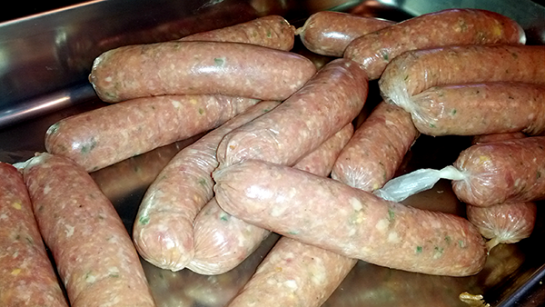 Excuse the slightly shoddy image above. This was taken with our phone camera and I was too giddy with brats on the grill excitement to actually take a better one.